Don't take my word for it read all the testimonials about my editing!

My professional editing service has a slot for your book!

When I booted up Citizen Sleeper for the first time, it immediately enthralled me with its premise. Its dystopian transhumanist pitch – surviving as a digitized consciousness of a human body implanted into a robot designed to work for a mega-corporation – is refreshing in the cyberpunk genre of games. Its slick, clean, and unique art style, coupled with its score, a Tycho-esque take on sci-fi beats, told me I was in for a good time, assuming the gameplay would click. And at first, I wasn’t sure if it was going to because its early moments are overwhelming, with a barrage of new mechanics and systems defining the first hour. I was rewarded for sticking with it because all aspects of Citizen Sleeper, including its gameplay, had me hooked after that introduction. Seven hours later, I rolled credits on one of my favorite gaming experiences of 2022.

You awake as a Sleeper, a robot powered by a consciousness that belongs to somebody else. In this instance, it belongs to someone that owes mega-corp Essen-Arp money, and to repay that debt, their mind has been digitized and put inside a machine explicitly designed to work for them; that’s the typical life of a Sleeper. You, however, have escaped, and the narrative of Citizen Sleeper begins there, unfolding as you learn to survive and thrive.

The story of Citizen Sleeper is simple: Evade Essen-Arp’s bounty hunters who want to reclaim you while securing a future for yourself. Erlin’s Eye, a space station that acted as my refuge before becoming my new home, is the backdrop of all this. I love how I became intimately familiar with the quasi-metropolis over time. Citizen Sleeper lovingly forced me to understand this space station as both a map for my objectives and a hub for deepening my relationships with its residents. To achieve this, I needed to complete various objectives aboard Erlin’s Eye ranging from paying off one of these bounty hunters to live another day to affording medicine I desperately needed to heal my constantly degrading body.

How that, and nearly every objective, plays out is determined by a unique dice mechanic and its connection to your physical condition. Citizen Sleeper’s primary gameplay loop is simple on paper: You’re given up to six pre-rolled dice each cycle. The healthier you are, the more dice you get. A six-dice roll carries a higher chance of getting a positive outcome when attempting to do something like earn money or fix a ship. A lower dice count, like a two, comes with an increased likelihood of a negative outcome, which can be pretty detrimental in some cases.

I enjoyed how often this mechanic put me in the hot seat. Do I use a six-dice roll to guarantee a positive outcome for an objective I really need to complete, or do I use it on a job that will net me a lot of money because I need it to afford medicine to replenish my condition? And on that same note, should I use my one die on a safer task or risk it on something that could greatly reward me right now? These decisions colored my entire Citizen Sleeper experience. Some were so stressful, especially those that felt like life or death, that I needed to pause and put the controller down for a few minutes. The way the game’s musical score amps up the stress levels in these situations was also devilishly delightful.

Citizen Sleeper uses these moments to take me through every throe of capitalism, which is the true antagonist in developer Jump Over The Age’s story. When I first arrived, I struggled to make it through one cycle without feeling completely overwhelmed and unseen. I couldn’t make money, so I was unable to buy food, which was necessary to keep my energy up. As a result, my health quickly worsened, and because of this struggle, I couldn’t afford medicine. This built on itself until I hit rock bottom, which locked me out of one of my Sleeper’s core abilities displayed on a sleek skills screen. I could only unlock it with an upgrade point, which is earned after completing main objectives. But, to accomplish that, I needed some great dice or at least multiple dice. With my condition in the dumps, getting either felt impossible. 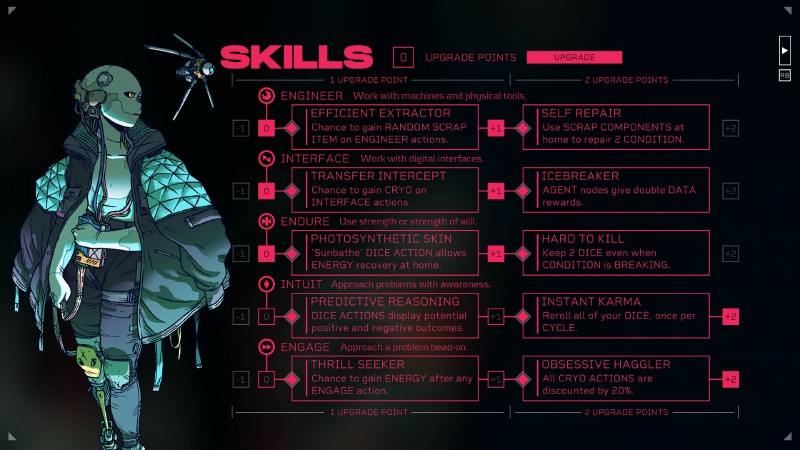 Over time, I overcame these challenges. Little by little, I earned enough money that I could spend less time obtaining medicine and food and more on actually completing objectives on the horizon. By the end of Citizen Sleeper, I stopped thinking about money, and I was instead focused solely on helping the NPCs around Erlin’s Eye that had become my friends and, in some cases, my family. I loved how this narrative arc felt personalized to me because everything that happened resulted from how I chose to use my dice over the dozens of cycles I lived through.

With various narrative options in place, I could have ended up as terrible as the corpos I was trying to take down, but I didn’t. I appreciated that Citizen Sleeper allowed for so many narrative branches because the more I played it, the more it felt like my own story. It would have been disappointing to end it pigeonholed into a set ending that didn’t align with my actions. If I failed one story, I might see those consequences play out in another. If I succeeded somewhere else, I might open up an entirely new storyline that affects not just one character but also others I met earlier. Above all of this interconnectedness, I was especially blown away by how my in-game actions connected to Citizen Sleeper’s themes, which, at its core, is a game about trying to survive under capitalism as an outsider.

In the end, though, Citizen Sleeper is less a critique of capitalism itself, which in its defense has been done countless times in the cyberpunk genre, and more an opportunity to showcase how those under its thumb persevere and succeed despite it. Its hopeful and inspiring message is backed by a branching, heartfelt narrative, and a great gameplay loop, making it tough to put down. Add in its enriching visual style and my favorite musical score of 2022 so far, and Citizen Sleeper is a game I’ll be thinking about for years to come.