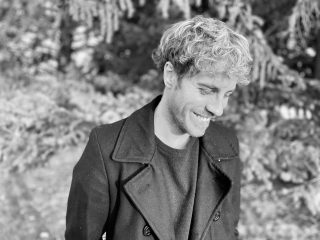 We continue this week, Monday through Friday, reprinting the sonnet sequence “The Death of Argos” by Nicholas Pierce (Photo), presented below by Mary Jo Salter. Last week we published the first six sonnets. Today is the late Richard Wilbur’s birthday, as it happens, and so we dedicate this post to him. — DL

What new thing can be done with old forms like the sonnet?  One answer comes from a new poet.  In his first book, In Transit, Nicholas Pierce invents an especially devilish rhyme scheme for an eleven-sonnet sequence, “The Death of Argos.”  The sequence is also an elegant narrative, an affecting love story set in contemporary Greece, while calling up The Odyssey. Inspired by a blank verse sonnet sequence by the late Claudia Emerson, which unspools as two tercets, a central couplet, and two more tercets, Pierce goes Emerson one better by rhyming aba, bdb, bb, dbd, ebe, every time.  Yes, that’s six b’s per fourteen lines. And a rhyming couplet “turn” in the dead center, another radical move. — MJS

The eighth sonnet, added today, extends the speaker’s thoughts he reads The Odyssey while on a bus in Greece. Odysseus’s dog Argos is linked thematically to the poet’s own story.

A few key seconds haven’t yet come back,
if they ever were recorded. Who can say
why the dogs didn’t, finally, attack,

much less what would’ve happened if they did?
On foot, defenseless, we were easy prey
to start with—then my cousin and I slid

into a ditch, scrambling to get away.
The footage skips ahead when I replay

this moment, picking back up with his leg
already broken and the dogs at bay—
or nowhere to be seen, at least. Less vague

is what came afterward: the brief but none-
too-gentle ambulance ride, the X-ray
revealing that the break was a clean one.

The incident put me in mind of S.,
whom I’d been trying not to think about
for a few months, not wanting to address

how cruel I’d been when I abruptly stopped
texting and calling her back; stopped without
so much as an excuse, letting her opt

both of us out. Of course, our falling out
wasn’t what I reflected on en route

to the hospital. Rather, it was her own
encounter with a dog, which left no doubt
a deeper scar than the two running down

her chin, down from the edges of her smile.
She told me that she didn’t run or shout;
was, when the pit bull lunged, still in denial.

Still in shock, sleep all but impossible,
I read the journal from my trip to Greece
after returning from the hospital;

read long into the night, about the night
when, meeting for a drink, we found release
from loneliness; about how S., despite

knowing me all of an hour, felt at ease
enough to share how many surgeries

she’d had to have in the last year, her face
still not quite hers; about the binding lease
that forced her to recover in the place

next door to where the pit bull went on living;
about its owner, who refused her pleas
to see the dog put down; about surviving.

May 28th—Watching from the top deck
as Paros shrinks on the horizon, then,
in an instant, vanishes; as each new speck

becomes an island, looms, recedes from view.
On my way back to Athens, once again
on my own, though we plan to rendezvous,

and I, just as soon as she gets in.
It’s strange how quickly things can happen when

abroad, that we could meet and fall in love
(is there a faster-acting medicine?)
on the same day; that I, at this remove,

perhaps because of it, could know we had.
Stranger still, that the scarring on her chin
should be what drew me to her, though I’m glad

it did. We met on a bus taking her
to Naousa (rhymes with “wowza”), where I’d been
the day before, and taking me, as per

my host’s advice, to drafty Golden Beach.
We chatted till she disembarked, within
those few short minutes managing to reach

the same conclusion. With this very pen,
on a scrap of paper torn from this Moleskin,

she jotted down her number. Pausing here,
I flipped to the back pocket, where the ten
digits had lived for almost half a year;

though I had no intention, not that night,
of calling her, no clue how I’d begin
to explain myself. “I’m sorry” sounded trite.

Memories of the trip came flooding back:
I rendezvoused with S. in Nafplio
after the ferry ride, first losing track

of time, then of myself, as I explored
her body with my own, getting to know
each corner more each night, what she adored

and didn’t, taking things both fast and slow.
I learned, as well, where she was born (Bordeaux)

and worked (at a high school in Athens), that
she taught biology and had done so
in Cairo during the youth coup d’état—

but not her age. I never learned her age,
which was, since she had both an olive glow
and graying hair, impossible to gauge.

June 3rd—This morning I was moved to tears
by a brief passage in the Odyssey,
in which Odysseus, some twenty years

after he sailed for Troy, comes home to find
his old dog Argos cast out like debris
on a dunghill, by freeloaders inclined

to think this king disguised as nobody
had died an early death somewhere at sea.

I read it on the bus to Corinth, S.
asleep on my left shoulder, probably
for one of the last times, as we have less

than two whole days together, till my flight
departs from Athens and this fantasy
concludes—as I don’t think we’ll reunite.

“Did Argos see the true Odysseus
or recognize beneath his beggar’s clothes
the man he used to be, was previous

to leaving Ithaca?” I asked myself
while flipping through the epic, as the rose-
red light of dawn enveloped the bookshelf.

My hope was that the passage would disclose—
I don’t know what. An answer, I suppose.

What fell out, rather, was a Polaroid
I’d put there for safe keeping, one of those
I’d taken while in Greece, of a deep void

near Corinth, a canal that ran as far
as S. and I—while standing on our toes—
could see, which even then recalled a scar.

Nicholas Pierce is pursuing a Ph.D. in Poetry at the University of Utah. His poems have appeared in 32 Poems, Birmingham Poetry Review, The Hopkins Review, and Subtropics, among other journals. His first book, In Transit, won the 2021 New Criterion Poetry Prize. “The Death of Argos” appeared in that volume, published by Criterion Books.